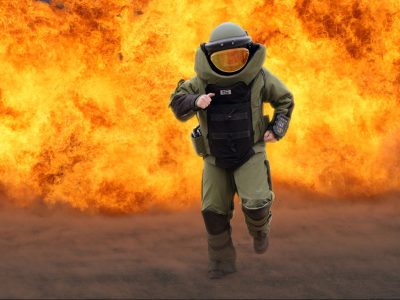 The Sheriff’s Bomb Squad is primarily responsible for the safe disposal of explosives and improvised explosive devices (IED’s). Other related duties include investigating post blast scenes, providing training in explosives to public safety personnel, educating residential and business communities in bomb threat response, and participating in public awareness programs concerning the dangers of explosives and fireworks.

The Bomb Squad currently consists of 2 full-time members (1-Sergeant and 1-Sr. Deputy), whose job responsibilities also include investigating arson fires located in Sheriff’s jurisdictions. Eight additional deputies are assigned to the bomb team in a collateral capacity, i.e., their primary assignments are working patrol or investigations.

All Bomb Squad members are required to attend and successfully complete the Basic Hazardous Devices School located at Redstone Arsenal in Huntsville, Alabama. The basic hazardous devices school consists of an intensive 6-week training program and is presented jointly by the U.S. Army and the FBI. Each graduate of Hazardous Devices School must return every 3 years in order to be re-certified as a Bomb Technician.

Bomb disposal is a unique and highly specialized assignment that requires specialized equipment and training. The Sheriff’s Bomb Squad maintains all the equipment and resources necessary to respond and render safe explosive devices. This equipment includes bomb suits, portable x-ray equipment, various types of disruptors, a total containment vessel (TCV), and two robots; a Remotec MK V Hazardous Response Robot, and an Allen Vanguard MK II Robot. The use of these robots allows Bomb Technicians to safely remove and/or disrupt an explosive device without having to enter into a “kill zone.” These robots have also been used in HazMat situations, as well as with barricaded suspects on SWAT related calls-outs.

Because of the dangers associated with explosive disposal, on-going training is essential. The Bomb Squad trains twice a month and routinely trains with other bomb squads in the region, including quarterly meetings with bomb squads from throughout Southern California. All Bomb Squad members belong to the International Association of Bomb Technician and Investigators. Additionally, the two full-time team members are required to complete 160 hours of arson training along with five Fire Technology classes in order to become State Certified Arson Investigators. These two team members also belong to the California Conference of Arson Investigators.