On January 10, 2019, patrol deputies from the City of Thousand Oaks Police Station and East

On January 10, 2019, patrol deputies from the Thousand Oaks Police Station were dispatched to

the 500 Block of Laurie Lane regarding a possible overdose victim. Prior to their arrival, a

near a vehicle in the carport of the apartment complex in question.

Upon arrival, patrol deputies made contact with Matthew Robledo who was visiting at the

residence and determined he was not suffering from a drug overdose, but was believed to be

under the influence of narcotics. Patrol deputies also contacted Travis Trent who lived at the

residence. Narcotics Detectives were summoned to assist with the investigation as well as an

Investigator from the District Attorney’s Office Bureau of Investigations.

belonging to Trent. Inside the duffel bag, deputies located two firearms and a large quantity of

Codeine syrup. Codeine syrup is highly abused and is illegal to possess without the proper

prescription from a medical professional. The duffel bag and the contents were determined to

belong to both Trent and Robledo.

grams of marijuana, 4.8 grams of Psilocybin mushrooms, 120 ounces of Promethazine/Codeine

syrup, two unregistered firearms and a large quantity of money believed to be proceeds from 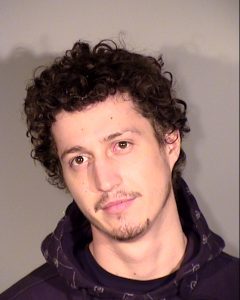 Detectives arrested an individual believed to be in possession of unlawful narcotics and firearms at is residence in Nyeland [...]

Detectives from the Ventura County Sheriff’s Office Narcotics Street Team arrested a suspect after they determined the suspect was [...]

On 3/11/20, Daniel Kornbluth suffered a medical emergency and was transported by ambulance to the Community Memorial Hospital Emergency [...]

Detectives with Camarillo Patrol Services arrest a suspect for possession of narcotics and firearms. https://local.nixle.com/alert/9243049/

The Fillmore Police Department responded to Fillmore High School and conducted a search in response to a bomb threat.  [...]